Onto a New Dick Year

I am mystified about how another year can come and go. Not to sound like a toothless old coot, but it seems like we were in summer, enjoying some gigs and BLAMO, snow then ringing in the new and out with the old.
Supposing there has to be some sort of reflection on the year past although I have trouble remembering it going anywhere (now THAT sounds like a toothless old coot). The DWhisks certainly had a fun ride in 2010 with the addition of Bob "Pleather" Rich III and a renewed vigor and quality in the music and performances. So, with that said, I wanted to list what the top 5 moments were for Dick Whiskey in 2010.

5.) The Mojo's Gig in Jamestown-When the band lost bassist Tom Doeseckle, it looked as if Dick Whiskey limped its last gig. The band was saved when Bob "Mystic Cowboy" Kupczyk recruited Bob Rich III to play bass. The band landed a short-notice gig in July at Mojo's and only had two rehearsals to get our new addition up to speed. Mission accomplished in that not only was Bob up to speed but the DWhisks rocked the joint. This gig gave the band confidence that a little spit & polish and a ton of showmanship can get the job done.
4.) The Whiskey Saloon-After the gig in Jamestown, Bro T-Bone and myself decided to swing into an ass-end, townie bar located in Cassadaga, NY called the Whiskey Saloon. We had a good laugh afterwards because we were treated like two gay policemen. This was a classic example of "we don't take kindly to folks like you" and will go down in DWhisks lore.
3.) The 5 am jam at Bob's after Elmwood Lounge-In perhaps one the best post-Wally gigs, the band decided to stop over Bob Rich's pad for a after-gig roundabout and to refuel our whiskey-drenched buzz. When the "session" was over morning light was peaking at us as we left. The evening included the culinary skills of Bill as he fried up some burgers. A night to remember and since never been duplicated--as of yet. 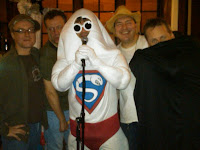 2.) The Rectory Gig-In the words of T-Bone, "The French maid. Need I say more?" This was one of those interesting, not-sure-what-to-expect Halloween gigs that was offered to the DWhisks. Held at the old Saint Francis de Sales rectory on Buffalo East side, the first impression driving up was, well, are we at the right place, but was soon replaced by awe at such a large space. We unloaded our gear, walked in and were surrounded by numerous gay men in superhero costumes. By night's end, the band had every Batgirl and Superman shaking their fannies to the sounds of DWhisks. We had a blast! Personal favorite moment is giving Mike Wrona a gash by throwing my tambourine at him. Hey, the sucker was tossing peanuts at me, I warned him and he got what he deserved.
1.) Hamburg VFW Post 2985 Gig-This band has learned over the past year and getting gigs at bizarre places that no matter what just play hard, have fun and drink heavily. No where was this most evident in the DWhisks' gig for a hockey benefit in the Buffalo Southtowns. From the very first sound-check song, we knew this would be a tough sell to the fish-fry eating VFW patrons as the hockey party was being held in another part of the building. Hecklers and folks with unaccepting frowns abounded but, damn-it, the band held firm, had a shot (or four)of whiskey and by night's end had folks out on the dance floor groovin' to the music. We felt proud by gig's end, especially doing it without ANY rehearsal time, and it proved to us that no matter what its the music that matters-that or the shots of whiskey for liquid courage.

The DWhisks would like to give a mighty thank-you shout out to all the good folks who shared a shot or ten with the band. 2011 is looking like a pinup gal with some great gigs lined up at the Legendary Elmwood Lounge and Club Diablo.

Love to see y'all in the new year!

Matthew LaChiusa is the frontman for Dick Whiskey. His new year's resolution was broken on January 2nd, 2:00 pm.

Posted by Matthew LaChiusa at 11:07 AM