When Dick Whiskey's talented bassist, Bob "Pleather" Rich III asked if the band would like to be the entertainment for a benefit for a junior league hockey team at a Southtown VFW, the immediate thought that popped into mind was a scene out of Hedwig and the Angry Itch or Flight of the Conchords.

Not that the cause or the gig was below us as a band (trust me, our standards are bar-room floor low) but the movie scenes of locals faces, in a combination of confusion, disgust and morbid fascination, looking blankly at the musicians doing their thing immediately flooded the imagination. 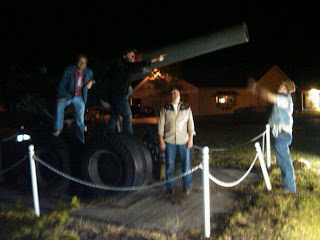 With this, the DWhisks jumped at the opportunity.

So off the band went to the Hamburg VFW Post 2985 to play a benefit for the Hamburg Hawks hockey team with no expectations apart from free beers and an opportunity to play after taking a month's hiatus.

When the band arrived the bar was packed with a mix of VFW regulars, supporters of the Hawks and a few tattooed sub-human species still undefined. 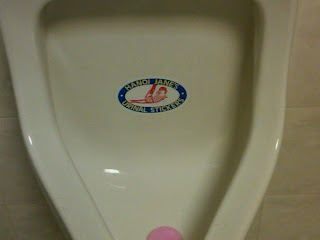 We promptly set up our gig, grabbed some beer and introduced ourselves to the onlookers. One of the organizers and sister of Bob Rich, Kimberly Rich Lupkin gave us a warm greeting and with this the band was confident to do their thing.

The DWhisks warmed up with an improvised rockin' tune with a good beat and nothing imposing in style or craftsmanship as part of a sound check and, in part, to feel the crowd out.

Well, we ended to exactly what I envisioned; blank faces and no applause. I turned to Bob "Mystic Cowboy" Kupczyk and in true DWhiskian fashion we shrugged, drank our beer, requested a whiskey shot then began our set.

For you see Bob and I shrugged in silent acknowledgement, because before we began, Mystic said to me, "This is a typical Dick Whiskey gig. We belong here." He's right. This is the type of Dick Whiskey and all other bands should play. The fact the onlookers didn't react wasn't the issue. It was the realization that no matter who you play to there will always be bias opinion and a sense of conventionality among listeners. As long as you do your best, be honest to the music and have a Goddamn ball up there, folks will open up to your sound.

Sure enough after our first set, the hecklers and those who were close-minded to our sound emptied out and we were left with a group of folks who began to like the music, tapping their feet to the beat and, by nights end, were out on the dance floor groovin' to the music. 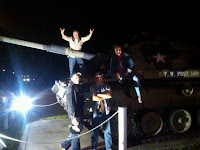 Would we do another gig like this again? Resounding HELL YES!

Matthew LaChiusa is the lead singer for Dick Whiskey and thanks goes out to Kimberly and her gang for asking us to play. We did have a blast. And if anyone sees the guy who was wearing leather chaps, please tell him the Village People called and they want them back.
Posted by Matthew LaChiusa at 8:11 AM 4 comments