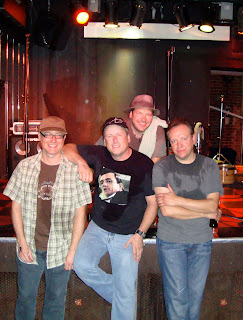 Urrgggh.
Okay, think I've have had enough rest over the last few days to sit in front of the screen without my eyes getting blurry to keep the Whiskey Bottle rollin'.
The Whiskey Dawn Summer tour continues to march with the DWhisks playing back-to-back gigs in hometown Buffalo, NY.
I have to say it is an honor and privilege to play at the club Lance Diamond built, The Elmwood Lounge. As soon as you walked in, there was this certain antiquity that spoke as clear as the mirrored dance floor. The place has an energy, and don't want to get too Shirley McClain on you, that brings out the entertainment spirit of those who walk the hallow parkay dance floor. 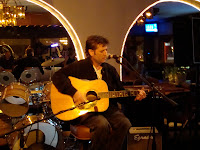 First up in the evening was a long-time friend from Fredonia NY, Mickey Dead. He strummed out his blend of acoustic Sid Barrett means Bob Dylan until his fingers began to catch on the strings. Not sure what this meant but he was done for the evening. The DWhisks appreciated his efforts and look forward to playing out with him again after his fingers heal and the blood transfusion takes hold.
Next in line was the talented Megan Callahan who brought her unholy cast of Macbeth to hear her brand of Americana folk-rock music. Being the show person she is, Megan did a fine job keeping folks entertained and drinking at the bar. She finished her set sometime after midnight with the bar patrons electrified for more music.
DWhisks went on at Midnight or so and played two of our best sets in the tour. The band had a blast, those who stayed with us until 3 AM danced and loved the music, and the whiskey kept flowing. A special Whiskey Bottle shout out to our friends Michael Wrona, Val Dunne, the black dude and his girlfriend that jived to to music all night and our old friend, Tom Doeseckle aka Rusty Jack.
Highlights of the evening included a well placed "That's what she said" by the legendary Lance Diamond with the low point being me spilling beer in one of our fan's lap.
Afterwards off the DWhisks went to Bob Rich's man-cave for more music, hamburgers and beer. Emerging from the cave at 5:30 am, it truly became the Whiskey Dawn tour. In hindsight, it was crazy to stay out all night considering we had another late-night gig at Club Diablo, but its all part of becoming immortal rock-stars, ain't it? 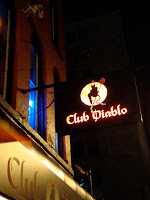 Club Diablo is the type of place Dick Whiskey belongs. The concept, the house of Satan and his evil vices, the stainless-steel bathrooms, and as many tattoos and body piercings as a carny working the Erie County Fair.
I just don't think the clientele belongs there.
Supposing after coming from the high of the Elmwood Lounge my expectations of playing this bar were set a tad too lofty. Don't get me wrong, I was grateful to The Pillagers for asking us to play in the evening and the band played one of the tightest sets to date. Overall, the gig was great for Dick Whiskey.
Sometimes you get that feeling that a great set with all the effort, sweat and work, gets wasted on a crowd? Kinda like "great music, wrong place".
Or as our illustrious Mystic Cowboy, Bob Kupczyk says, "It is what it is".
The DWhisks will be in action for the Buffalo Infringement Festival. One of the gigs will be an acoustic set, sort of the softer side of Dick Whiskey. Hope to see y'all there! 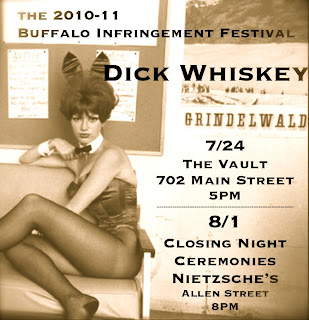 The Big D Lesson in Life 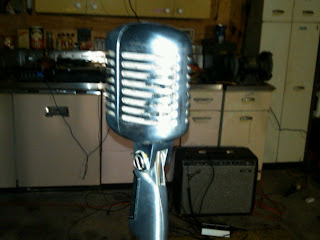 Well, my oh my, life is full of slippery ice and warm beer. And so it goes with the DWhisks' venture into Dunkirk for the Big D's Boogie Woogie Divorce Party.

To be honest, I kept waiting by the phone all day to hear if the shindig was cancelled due to the deluge of rain that cooled things off faster than an ugly nun. The phonecall never came and so the boys and I made another road trip into Chautauqua county.

After the GPS wound us through the beautiful grape vineyards and hints of aromatic piles of cow manure, we pulled up to the Big D's farm house out on Newell Road (should have known, eh?) and lo and behold, the garage where the Boogie Woogie was being held. Bro Thomas leans to me and promptly asked, "Is this the right place?" With a reluctant nod and spying Big D, I told him this was the place.

Now this is where I am trying, oh Lord, I am trying to learn those lessons that keep hitting me upside the head like baseballs caught-up in a hurricane breeze.

I am willing to go out on a limb and say Big D may not have expected us. I say this because of the sparsely populated "woogie" of all things "boogie". My first instinct was to flee under the guise of irritated bowel syndrome, BUT we drove an hour for the purpose of playing music. And so we set up our equipment and got ready to play to a crowd of 12 or so.

Then it dawned on me. It doesn't matter if the crowd is 12 or 1200. Its spirit of Rock 'n' Roll that matters. In this spirit is the idea of having fun, playing music you enjoy and sharing it with the other "woogies". 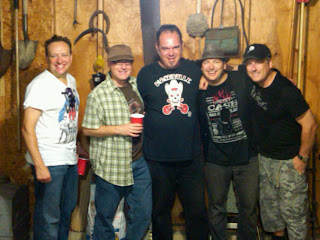 What also mattered was that the Big D wanted us there to play music to celebrate his divorce. Of course some of you may look at his reason for throwing a party as a way of lifting the middle-finger, but it was his party and he was crying if he wanted to (or drinking like a dehydrated sperm whale). The point is that Dick Whiskey setup the equipment, fired up the instruments and put on one helluva of a great show.

Afterwards, an acquaintance pulled me aside and said the gig was great. He told me this is what its all about, why we do those creative things. He went further in this by saying each one of the band members showed the creative reflection of themselves and this was embodied through the music we played.

Maybe this is true. Maybe he had too much to drink as well.

So pass the point of learning and 3 AM blog posting, I simply want say thank you to Big D for the opportunity to come down there and play for your party. We had a blast.
Posted by Matthew LaChiusa at 11:44 PM 1 comments

In the Merry Land of Oz

Okay, so the Whiskey Dawn Summer Tour has commenced and the boys and I are feeling just right about the direction of things to come. 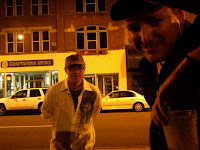 The opening night of the tour began at one of our favorite gigs, Mojo's Music Bar, located in the strange, in an amusing way, city of Jamestown, NY. Now I love this town the same way one loves watching salt disintegrate a snail, so the gig proved to another decent welcome from the bar folks with the boys and I making friends with the other band slated for the evening, The Cobra Brothers.
Guess they were a bit confused with our name cause they kept calling us "Whiskey Dick." It happens. My momma used to called it "performance pressure."
Anyhoo, they liked our sound and we liked their "Blink 182" ala pop-punk original music. It made for a good musical evening. I think Bob "Pleather" Rich even bought a couple
of CD's from them. 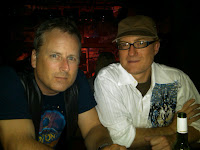 Bob Kupczyk (on the right with Bob Rich) wore his fancy gig shirt (as seen in this photo). He was very proud of it and he told us it kinda made him feel like he was Superman (or was it Clark Kent). It must have worked because he had the bartender, Brandy, smiling at him like he was the cutest bedbug in the bar.
Bro Thomas and I had the opportunity to drive to the gig and back. Not only did we gorge ourselves on the disgusting food-things of McDonald's TWICE but shot the moon at our co-horts on the thruway.
We also stopped by a dive somewhere between Fredonia and Jamestown called "The Whiskey Saloon" in attempts to get a future gig. I mean the place had the right name for us and, judging by some of the Internet pictures, it looked like a perfect place for the DWhisks to play.
Entering in it seemed relatively safe with a few folks wearing cowboys hats and such. Bro Thomas and I went to the bar to find out who we could chat with about getting a gig. The skanky bartender looked at us and went on attending some other folks in the sparely seated bar.
We waited for her to come over and ask us what we wanted. Well...we waited. And waited. Finally, Bro Thomas says to me "We ain't gonna get served so let's leave," and so we did.
I'm gonna chalk that one up to the old traditional "We don't serve your kind around here".
With the first gig down and out, everyone got home safe and sound to which we jammed at Bob Rich's house until 4 am. It was a great way to put a capper in the evening's ass.

Next gig we got is the Big D Boogie Woogie Divorce Party on July 9th. This will be another road-trip to the Chautauqua area as Dick Whiskey heads to Dunkirk, NY. The band is honored to celebrate our bud, David Blogette's independence through rock 'n' roll, hotroads, beer and roller-derby chicks.
Hope to see y'all there
Posted by Matthew LaChiusa at 7:02 PM 0 comments