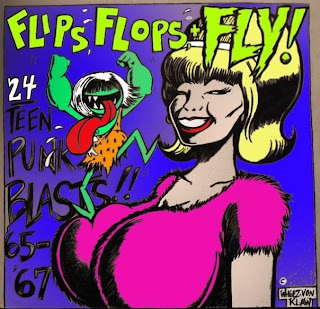 Posted by Matthew LaChiusa at 5:53 AM 2 comments

October is Dick Whiskey's favorite month.
The fall is here and that means cooler temps and the band not sweating our asses off at stuffy gigs. It also means Halloween kickstarts the holiday season to which our band has fitting songs that include vampires, psychopaths and a mascara monster waiting at the end of the road. And, most importantly, the band can sip on seasonal beers like Sam Adam's pumpkin seed, butter-nut acorn and sage ale. This October proved to be extra special for the DWhisks for the band found themselves with two contrasting gigs.
The first of the gig was a benefit for the Food Bank of WNY. Being asked by The Pillagers frontman, Gary Zoldos, the DWhisks gladly played a set to benefit those in need. Have to give it up to Gary because he organizes these events and donates money and not cans of year-old applesauce or corn to the Food Bank.
After DJ personality The Bulldog (of WGR 550's Schopp & The Bulldog fame) introduced us, we played to Club Diablo crowd that got into our music and by set's end, with a whiskey soaked stage, was groovin' to the sounds of the DWhisks with smiles all 'round. Cherry-toppin' coolness was when The Bulldog on his way out, stopped, turned around back and told us how much he really liked the band.
It was a rock 'n' roll bar gig and DWhisks emerged with some new-found friends, a good whiskey buzz and knowing the gig went well. All Kumbaya feelings aside, I'm not going to go into sloppy details of our second "Heroin" set or Bob "Mystic Cowboy" Kupczyk forgetting he offered guitar lessons to a chick until he was reminded on Facebook.
The second gig in October was a private Halloween party held at the old St Francis de Sales Rectory on Buffalo East side. The latter fits into the scary part of the DWhisks Halloween ride. 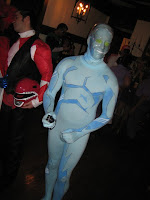 Upon arrival the scene was besieged by gay men in superhero costumes with directions to come and play in the dining room. This did not phase me in the least, but I find it interesting heterosexual women tend to hang out with gay men and this place was crawling with them. Kudos! We setup, told the nicely shaped superhero DJ to kill her house dance music and began to play our first set to a crowd of curious onlookers. 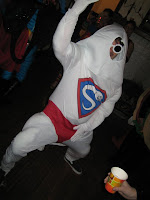 By the fourth song, we had the house groovin' and shakin' their costumed butts to the sounds of the DWhisks. We even threw in some on the spot requests with the holy clang of the cow bell. The night was truly complete when the band adopted our official mascot, The Sperminator, who did his best to get people to come and dance.
The true superhero in all this was Bob "Pleather" Rich III for fighting through his viral concoction of fever, sniffles and nastiness to play a marathon set. His efforts were truly rewarded in that all the heterosexual females stayed on his side and he got a fair share of cat & bat women.
Overall a fantastic evening to had by both superheroes partygoers and the DWhisks. I wanted to give the band an opportunity to express their thoughts on the evening and let you know in their own words how much they enjoyed it. 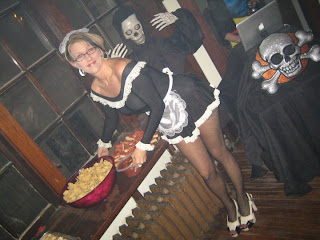 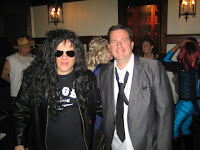 A special thanks to Sal (pictured on right with Joey Ramone) and Tim for having us down there and we truly look forward to doing more gigs at the Rectory!

Posted by Matthew LaChiusa at 8:28 AM 1 comments