Okay, so it's been a while since last blog.

Like recovering from a bout of stomach flu, The Greetings from the Whiskey Bottle hasn't fully returned. What can I say? Been as busy as a hooker during shore-leave, so just haven't had the opportunity to sit with a dram of Jim Beam and ramble.

The Ramones have been one of the most underrated yet influential bands of the late-twenty century. Fortunately, the band finally received long overdue prominent recognition by being introduced into the Rock 'n' Roll Hall of Fame in 2002 and an 2011 Grammy Lifetime achievement award.

Unfortunately, dying of lymphoma in 2001, lead singer Jeffry Ross Hyman aka Joey Ramone did not see this recognition whereas guitarist John William Cummings aka Johnny Ramone and bassist Douglas Glenn Colvin aka Dee Dee Ramone did not see the HOF induction due to their unfortunate deaths (Johnny succumbed to prostate cancer in 2004 and Dee died of a herion overdoes in 2002).
Awards or not, I am sure each member understood the influence they had on shaping not only the American punk scene but modern music as a whole. The Ramones truly brought change when it "was needed fast before Rock's just part of the past" by trashing the Glam, massive guitar, garbage posing as the next phase of Rock 'n' Roll.

Bands from Green Day to the Misfits, Social Distortion to the Foo Fighters, were influenced by the driving, chopping seemingly single chord music ripped from the Ramones. British punk-pioneer, Joe Strummer saw the Ramones and after Johnny Ramone said to Strummer, "We're lousy, we can't play. If you wait until you can play, you'll be too old to get up there." This inspired Strummer and soon after this he and his bandmembers of The Clash played live shows (and the rest is history) seen below.
Clearly, The Ramones had an impact on how post-modern music was shaped, so this debate should be shelved with the argument to whether or not punk is American born or hatched in the UK. We all agree its the Yanks that got it going, right?

And Jon Lydon is an idiot for saying otherwise.

The true debate now lies with which Ramones albums were the most influential. So, with this said, I am now putting in order, without any particular number to rank them, these albums.

The Ramones-1976 Sire Records. This self-titled, first album launched this four-piece band from Queens into history (and, to some, infamy). Featuring Ramones "classic hits" Blitzkrieg Bop, Beat on the Brat and Now I Wanna Sniff Some Glue, this album created the American punk movement. Surprisingly this album reached #111 on Billboard's 200 and was, lamely, ranked #33 on Rolling Stones 500 Greatest Albums of All Time. With the  Ramones ripping songs under 3 minutes, this album set a standard for punk and, later, alt-music bands to follow. 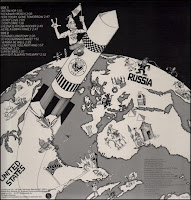 Rocket to Russia-1977 Sire Records. What the above album did to create an American music movement, this album cemented the Ramones place as forefathers of Punk music as it became the quintessential must have album in any budding punker's album collection (I wore my LP copy out). The second attempt reached #49 on Billboard's 200 and was, again lamely, rank #105 on Rolling Stones 500 Greatest Albums.

What makes this album influential is the marriage of punk, classic 50's rock, 60's surf music resulting in 14 songs under 3 minutes. Nothing like this was heard before Rocket to Russia was produced, but the sound it help create and launch the Mod-Garage/Surf Band movement. Oddly, this album did not create any anthem or "hits" but the record is loaded with some of the best Ramones music from the first song Cretin Hop to the last Why is it Always This Way?

End of the Century-1980 Sire Records. Although the 1978 album Road to Ruin introduced a more pop-infused Ramones, this album fully shifted the band's sound to a more pop-driven, softer approach. The album saw success as it reached #44 on Billboards 200 and #14 on the UK Album Chart. For many, it was a dismal attempt at legitimizing their sound, yet for others, the album marked the beginning of the band becoming rock icons.

Legendary girl-band star-maker (and future killer) producer Phil Spector was brought on for this fifth album. The result met mixed reviews including bandmember, Dee Dee Ramone who once was quoted as saying "I think some of the worst crap I wrote went onto that album." Regardless of taste, Spector's influence on End of The Century had a directed impact on the band that altered their sound until later albums. Controversial or not, Spector, at times with a gun pointed at the band, undoubtedly delivered the granddaddy album of the Power-Pop-Punk movement echoed through Blink 182, Green Day and The Queers.


That's it. The most influential Ramones albums. Let the debate begin.

In their vast discography, it is most certain that one or two albums like Too Tough to Die, or Leave Home left some impression on group that inspired them to become the next alt-rock or mod-band to make it to the next level. And certainly albums like Leave Home with Pin Head or the Road to Ruin's I Wanna be Sedated are viewed as the band's anthems that to this day are considered punk-rock standards.

So are the Ramones deserving of Hall of Fame recognition? Absolutely!

Its just a pity the recognition was so long overdue.


Matthew LaChiusa is the lead-singer of the Roots Rock Buffalo bar-band, Dick Whiskey. The band has managed to incorporate an accordion into covers of "Ramona", "Jack and Judy" and "The KKK Took My Baby Away". He also thinks Jon Lydon is a fool for taking credit for creating the Punk movement.

Posted by Matthew LaChiusa at 9:46 AM