Music of the Dick

Been awhile since there has been a posting on this blog and my apologies for that. Life can get in the way of the simplest pleasures, so taking time with a scotch and soda to write a "Greeting From the Whiskey Bottle" entry is rendered down like bacon fat for gumbo.

The DWhisks have been a busy bunch since the last posting on this blog with a few fun gigs and a couple of dogs to boot. Like the Mojo's gig with half the band missing and the stupid idea to stop at Denny's on the way home after doing shots.

Not saying any of the gigs sucked left hind- tit, but some gigs are a complete hoot and others lie down and barely moan like a drunk Irish girl you went home with on Saint Patty's day.

That's how it goes in the rock 'n' roll world...I guess, considering the gig we had this past June.

The DWhisks played the JackLords reunion gig at Nietzsche's closing up the show for the legendary band and in the process having a grand ol' time.

Kudos to John F Kennedy for throwing the event together and a special thanks for considering us in a line-up of some of the finest Rockabilly and Alt-Country bands in Buffalo, NY.

Plutos to drummer Thomas "T-Bone" LaChiusa for showing up and playing the gig with a flu bug, looking like a gangster zombie, and holding the puke in.

Could have turned real nasty in a drumbeat if you know what I mean.

And more recently, Dick Whiskey has seem to have found a home at the Elmwood Lounge as the band plays every six-weeks in the bar's music rotation. With a recent late June gig with the Seven Ounce Pony's, the band had a great time seeming to find an opportunity to do some originals and play a couple of new cover tunes.

Also nice to the legendary Lance Diamond give us a nod of approval at each gig. 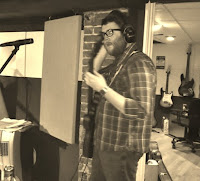 So, the gigs, although have been few and far between this summer, haven't been lacking in energy and fun. With the newly added rhythm guitarist, Michael "Moonshine" Bisson (the bearded guy pictured left), the music of the DWhisks has become more layered and polished. The band is finding an identity and along the way continues to keep having fun, doing shots of whiskey throughout the set and shows a diversity in the music.

Thanks bearded guy on the left.

A summer hiatus? Hell no, just regrouping and writing new tunes and learning a few covers to be ready for a great fall season.

To the music of the Dick!

Matthew LaChiusa aka "The Reverend Johnny Scotch" is the front man for The DWhisks and really enjoys the fog machine at Mojo's. Tune in his "Greetings From The Whiskey Bottle" Podcast by going to Scotch and Soda
Posted by Matthew LaChiusa at 8:39 PM