Much to the chagrin of all the sun-worshipers, margarita sippers and DWhisks' followers, summer is in its last month and with it the Whiskey Dawn Summer Tour is coming to an end. 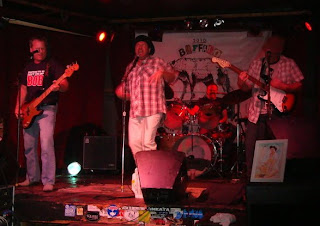 C'mon , you know all good things can't last.
Chin-up, Buckaroo, sure the days are getting shorter but Dick Whiskey ain't packing it in. No sir, the band is planning to keep this going throughout the year.
In the works is another EP of recorded originals, a Halloween party and return gigs to some of DWhisks' favorite spots, The Elmwood Lounge, Mojo's Music Bar and the Vault with future gigs in the making at the Tudor Lounge and Nietzsche's.
Before you know it, May will roll around and its onto the next Summer Tour.
We're taking suggestions for tour names, got any?
Onto the updates.
Dick Whiskey's final two Summer Tour gigs were on opposite sides of the rock 'n' roll spectrum. This is what one expects when entering into the Buffalo Infringement Festival. 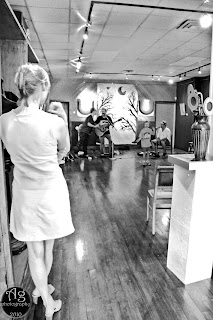 The first scheduled show was an acoustic set at the newly established hipster gallery, The Vault. The set best exhibited the softer side of Dick Whiskey with Mystic, Pleather and Reverend easing along in a "dreamy" state (just go with it).
It was a daytime gig with a modest turnout of folks. I would say it was a combination of a deluge, Saturday afternoon laziness and the gig being before sunset.
You see a majority of our followers are vampires and this was a daytime gig. We didn't promote this one as much as the others because we didn't want to turn some of our followers into dust.
Anyhoo, the band made friends with funkette owner, Amanda and certainly all look forward to the band doing some more acoustic sets, preferably in the evening for our living dead friends, at The Vault.
The second show of the Buffalo Infringement Festival was at another timeless classic Buffalo Bar, Nietzsche's for the closing ceremonies of the festival.
I love this bar. 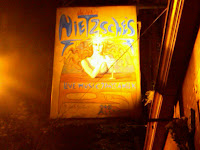 The band set up at 8 pm and was ready to roll, finding the opportunity to do so at 9 pm (classic BIF scheduling). Armed with a full, electric lineup the band played one of its most rockin' sets in the Whiskey Dawn Tour, prompting the Rock 'n' Rock Messiah, Butch Audacity to claim, "You guys rocked."
45 minutes later, the band wrapped up the set with an audio BANG (and the looming, threatening gaze of Eric Starchild), putting an nice exclamation point to a great summer tour.
Many thanks to those who came out to see the band do their thing. We appreciate the shots of whiskey and the support throughout the summer tour. This is a one-person-at-a-time fan base and we mightily appreciate this loyal following. So much that the next time we see you, drinks are on T-Bone!
Dick Whiskey is taking an August hiatus but plans to be back in September with some new material and the same ol' attitude. Trust us, we ain't going away.
Hope to see y'all around.
Posted by Matthew LaChiusa at 8:08 AM